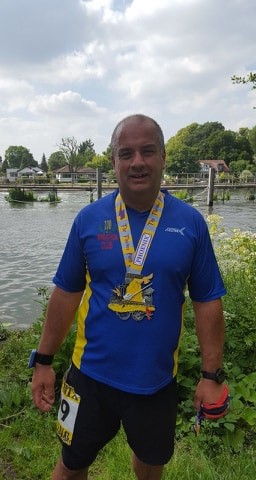 Kit Manager,  or as one runner calls me ‘Boot Boy’

Back in 2009 I had not run since school and then it was to get away from school not to be there, but watching the runners come over the line at London Marathon while supporting runners for MACS, the charity that supports Ben (my son) I suddenly realised that I was going to give it a go the following year. Yes the family did laugh!

The original Ox Marathon held by White Star Running, it was a single loop course over multiple terrain, best part was it was hilly and muddy!!

So I decided another White Star Running Event would hold my 100th in 2017, I wanted it to be a single loop course and the one I chose was Giants Head with all its hills, hills oh and even more hills, (but even Ruth came along). Another main reason that I chose a WSR event was the location being in Dorset as I am based in Devon it meant family could come along to celebrate with me.

What’s your approach to training / running outside of races?

In 2009 training for my 1st marathon I thought it would be easy to run, everyone runs!

Well that thought was soon dropped as I wheezed back home after going for a run, well, I had managed to run from one lamp post to the next one (surely that’s a half mile at least?) Well after several weeks of attempting it I went on-line and found out that I was doing it all wrong and followed a C25k programme, I was also going out too fast and trying to sprint rather than run, so over time I turned it to a slower and more cautious run., and managed to get around my 1st marathon at London in 2010.

In 2016 I decided to give a bit back to others and I became a Leader in Running Fitness I now organise a not for profit running group specialising in getting up and running. So I am out running one, two or three times a week at a slow pace, I then try and go out and do fast pace at different times of the week (but often do not manage to get out on these).

All the marathons I have run in so far are in the UK, if money was no object I think I would start with the Majors, but I have been told by my cousin that I have to run Newark Marathon (USA) before New York.

Running on my birthday since 2012.

On these days I very rarely make it to complete the distance as my mind is on my mum who passed away. I know she would be amazed at how many marathons I have now run, I was only doing one marathon a year, before she passed away.

To give it a go, it is worth the effort, it is all about the journey and it is YOUR journey no-one elses.

Work takes up a lot of my time! Then there is family life (including the grandson), MACS (charity that supports Ben).