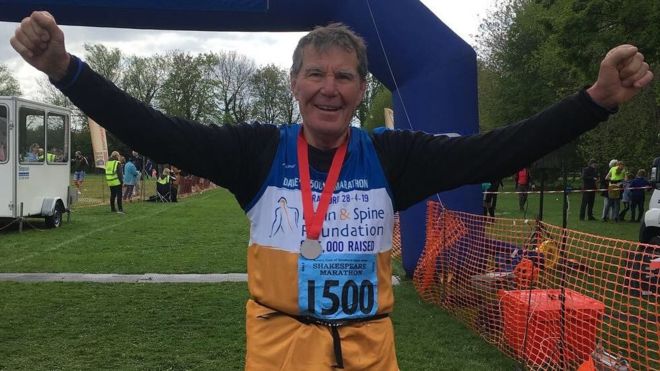 A fundraiser who has run every London Marathon since 2002 has been made an MBE in the Queen's New Year Honours.

David Phillips, 75, from Claverdon, Warwickshire, has raised over £135,000 from the marathon for the Brain and Spine Foundation charity, to support people with neurological problems.

Mr Phillips said he was pleased someone felt "grateful enough" to put him forward for the honour.

The fundraiser, who is married to Robina, first got into running while a hooker in the first team at Kenilworth Rugby Club.

"We saw a thing adverting the Coventry Marathon and we said we would do it," he said.

"It was a Saturday night in the bar, we had not a clue how far it was, where it was, what to wear but two out of the five of us actually did it.

"Then I found one in Stratford-upon-Avon, one in Stoke-on-Trent, Wolverhampton and suddenly you find them all over place."