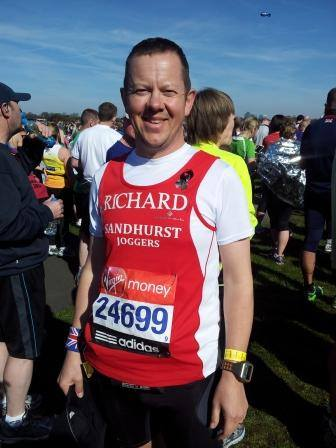 Tell us something unusual (non running) about you.

I once got lost in the dessert in Libya and had to walk 6 miles from a trapped car to be rescued, having no phone, no gps, a compass and a paper map which I made into a hat to keep the sun from cooking my head.

93. Should have been 96 at the end of March but a combination of illness, Storm Ciara and Coronavirus meant I couldn't run them.

London in 2013. I had a target of 4:30, but got a foot injury 2 weeks before and came in at 4:35. It was painful because of my foot but a great experience. I thought I could at least get to my target time and at my second at Portsmouth I did 4:14, then someone said I could go sub 4. After Greg Ward said to me fewer people get to 100 marathons each year than climb Everest, I was hooked.

Geotechnical Engineer. I work on major infrastructure projects and local flood protection schemes. I have also been the chairman of my local running club Sandhurst Joggers, where my motto is "Everyone can run a marathon, eventually."

My inspiration comes from all of my friends and the people I meet at marathons who do amazing things running.

What is your go to running snack before, during, after a run? Pre-race it's got to be porridge and banana, during a race it could be anything, but I will always have a jaffa cake if it's there. Afterwards I like to recover with a bit of a guilty pleasure - a KFC zinger burger!

I'm a keen drummer, though I have never played in a band. I'm still learning. It's very theraputic.

I got a huge mileage out of my Hoka Mafate Speed 2s, over 800 miles which made them pretty good value. Other than that, I might suggest rainbow coloured leopard print leggings, as worn by Ruth Benzimra. Guaranteed to make you smile when having a hard day and running happy is the secret to any successful marathon.

That would have to be Brighton marathon 2015, which was not that well organised for such a costly event, but it was the nearest I have run to a perfect race, nailing my target 9 min/mile pace on every mile up to 22, when I then just got quicker and quicker finishing mile 26 in 7:30. Ten paces later I couldn't move a step, so I had left it all on the course. It's still my PB.

On my first run at the Farnham Pilgrim passing through Britty Woods not far from the finish, I saw a woman off to the left kneeling within a 5 pointed star on the ground, then another in witches costume leapt out from behind a tree screaming! Scared the life out of me and I finished the last couple of miles at a damn good pace!

I have had a few Achilles injuries, and a bit of patella tendonitis, but my biggest problem right now is a massive pain in the arse - yes, I have glute issues! I have never lost a toenail, so I feel a bit of an amateur in that respect.

Where do you think you will run your 100th?

I had planned my 100th to be at this year's Farnham Pilgrim - my favourite marathon, but coronavirus has probably put paid to that. I probably could run enough marathons before then, but I wanted to get fitter this year in the lead up to that run, so I could make it a really good performance as well. I'm expecting spectacular fixture congestion in the autumn as races get rescheduled, so I'm not sure yet where my 100th will be.