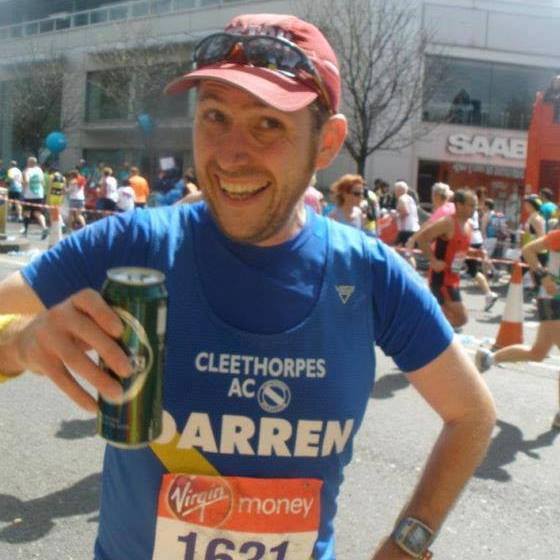 Tell us something unusual (non running) about you:

I’m allergic to lipstick. I realised this in adulthood when a girlfriend I had at the time always seemed to bring me out in a trout-pout. That relationship didn’t last.

I'm also absolutely petrified of birds, and my ever-loving wife wife very kindly decided that the best possible thing we could do to celebrate my daughter's first birthday.was a visit to a parrot zoo, with a massive walk in aviary.

Secondary School French Teacher by profession, although I’ve now moved upstairs into an office where I write timetables and play with numbers for a small Multi-academy Trust.

My first marathon was Edinburgh in 2008. I travelled up with my wife and we stayed in the Ibis hotel in the city centre on the Friday. Part way through the night, we were woken up by a fire alarm and the hotel was evacuated. It was then evacuated again at 5.30 am on the Saturday and we went to Costa Coffee in our pyjamas for breakfast. That race was the first time I became aware of the 100 Marathon Club. Better than that, I got to the finish at Musselburgh Racecourse after 5 hours, but still before my wife, who was stuck on the supporters bus from the start.

There are many people who I have met on my journey who have inspired me, but the person who really set the whole journey in motion was Foxy, in Milton Keynes. Although, to be honest, most of the time I was getting myself round the lake in order that Karen Webber would either not be disappointed in me or tell me off.

Beer before a run, beer during a run, and beer after a run. Although in seriousness, I’ve had a lot of time experimenting with different nutrition because the whole marathon running thing gives me awful stomach issues. The night before a run I try to avoid too much gluten, so pasta is out of the question. I’ve had some decent runs fuelled with rice, or with rice noodles, or something potato based. I don’t eat on the morning of a race, and fuel on jelly babies or Dextro tablets, although a Coke or a beer give me a decent kick in the last hour or so if I can get them. It takes me hours to be able to eat after a race, but by the time I’m hungry I’m usually more than able to murder a Doner kebab.

Nutrition has always been the hardest thing for me to work out, I’ve had real difficulty fuelling during Quadzillas and before foreign races.

Travel. I’ve visited four continents and since I got my 100 I’ve reduced the number of marathons I do in order that I can use them as an excuse to go and visit new countries. I’m working my way through the 27 member states of the European Union at the moment, and am 2/6 for the World Marathon Majors.

Most people have a favourite pair of shoes, and a favourite GPS watch, so I won’t recommend those. Not enough effort goes into choosing a decent pair of running shorts, not necessarily for racing, but for training as well. I’ve got a few pairs of Ronhill Ultra shorts, which have masses of pockets, pockets everywhere, so I can wear them to commute to work and carry my keys, and phone, but they’ve got plenty of room to carry gels (if that’s your thing) or whatever else you like to take out with you for three hours on the run. They’re the only shoes I’ve found that can carry my phone and my car keys together.

Running into or through buildings. Primarily the arena finish of the Frankfurt Marathon. Running into Scunthorpe United’s stadium to record a 1.27 half marathon PB two weeks after crashing and burning in Brighton was a proud moment, too.

Running through the reception of Sirius West Academy in Hull to be accompanied by the school choir. It might not have been my best moment, but it was certainly the most surreal.

I’ve generally been lucky and relatively injury free. Most of my issues have been mental, although I knew I was doing too much, for myself at least, running a marathon a week or so for the last 10 of my 100, when PF started to kick in. I’m surprised by how lucky I’ve been, because as a child I was a martyr to my Achilles tendons.

100th Marathon was 5th November 2016 at Caldecotte Lake in MK. I really wanted to share the occasion with the people who had shared most of the miles. I’d had a fantastic few years of running doubles round that lake, believe it or not, and it seemed to be the most appropriate venue. Some of my running club came down with me as well, which made it even more special.