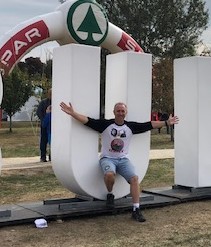 My school was 2 miles from my house in Widnes – I didn’t like school dinners so lunchtime I ran home/back . My first marathon only cost me about 10p but now the price has increased to about 90p.

I have many favourite races all for different reasons – so I will go for the Paris Marathon when in earlier days I could run quickly I finished in 2hours and 54 mins , no one in front or behind me and it felt like I had won the gold medal in the Olympics on Avenue Foch near the Arc De Triumph !

Ran it in NYC – and had a massive union jack flag to wave around central park on the last 800m, almost brought down the finish gantry. If you are going to do something big, do it big style !

To train as and when you have free time – your commute or with friends you can arrange some crazy escaping trail runs.

Probably somewhere remote in the world to see and experience the planet – the north and south poles the equator and of course the Vanguard Way !

I turned up in Paris – via Eurostar and hotel checked in Paris – got to the expo where the notice board said the race was in one week’s time – what a booking error ! I returned the next week to show I would not be defeated – who hates Paris anyway , it’s a great place !

Some race organisation Richmond Park, Vanguard and Woldingham and lots of travel !